Yelp is turning up the heat on businesses it says are manipulating its “natural flow of reviews” on the site. It is vowing vengeance against two groups the company says are abusing its rules: reputation management organizations that promise to fix Yelp reviews, and the businesses that hire them.

Not only will the company issue consumer alerts, Yelp’s program designed to flag businesses that violate its terms, they say they will demote search rankings too. This all sounds like pretty serious stuff, so let’s dig into what Yelp is really saying here.

We first became aware of this through an email directed to my office. I’ve pasted the email in its entirety below: 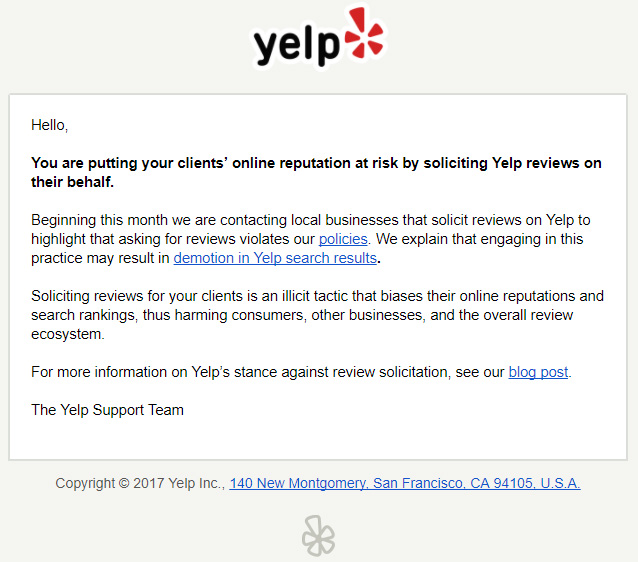 What Yelp is Really Concerned About

My guess is that several Software-as-a-Service (SAS) providers that provide survey platforms to increase positive reviews were spamming users. These platforms basically send out a survey to your existing customers to ask how they felt about their past visit, or about the service they received from your business. Anyone that responds positively automatically receives a request to leave a review on Yelp and other review websites that the business chooses to solicit reviews on.  In the past few years, a number of such software providers have launched successful businesses, including DemandForce, ReviewInc, GetFiveStars. BirdEye, BrightLocal, and ShoutAboutUs.

I reached out to a few of these companies to see if they had received this notice from Yelp and if they had any comments. A few had received this notice, but none wanted to make a public statement, all fearing legal action from Yelp. One of the companies has already removed the ability to include a graphical Yelp Logo link in the “Thank You” page for soliciting reviews. However, you can still manually edit the email template to include a link to Yelp without a graphical logo of Yelp.

Yelp wants to make this about fairness, saying that it is only trying to protect the reputation of businesses that earn their reviews the hard way. Frankly, this is a blatantly hypocritical stance to take considering the way the company harasses businesses into buying into its advertising.

As a business owner, you’re essentially at the mercy of Yelp. It will create a business profile for you, without your consent, that you can never opt out of. Then, it assigns you an arbitrary score based on “users” it will fight hard in court to obscure, and charges you money to improve your standing in its search.  There have been numerous lawsuits claiming that If you don’t pay them, your positive reviews would get filtered and negatives would not. Although Yelp has successfully fought back and claimed that their algorithm, not manual interference, is to blame.

However, now Yelp is now saying that they will purposely demote your listing and also post an embarrassing notice on your business page if you solicit reviews. The notice would inform Yelp users that you have tried to increase your reviews by violating their terms of service for an unfair advantage, which could mean lots of lost business as a result!

The Legal Point of View

I wondered if Yelp can do this legally and if business owners suddenly finding themselves in this situation may sue Yelp for business defamation damages. So I reached out to attorney Jason Hochman from Dinn, Hochman & Potter, LLC, which is a law firm representing small businesses and entrepreneurs, to see what he would say about this:

“Yelp seems to be having its cake and eating it too. Yelp is attempting to control and police the content that is posted on their site, yet they will claim immunity under Section 230 of the Communication Decency Act (“CDA 230”).  Section 230 provides legal immunity for interactive online service providers, such as Yelp, from most of the content posted by its users. In this latest move, Yelp is simultaneously trying to exert control over its users and the content they post, but will always claim it is not liable for any of the content posted. Further, by not allowing businesses to opt-out, businesses are forced to unwittingly participate and maybe forced into paying for Yelp services they might otherwise not need to protect their reputation. It seems that policies such as Yelp’s, which obscure the distinction between interactive service provider (immunity) and publisher (no immunity), will ultimately lead to either a court- led or legislative chipping away at the almost limitless protections afforded by the Communications Decency Act.  “

Mr. Hochman adds that If Yelp were to do what they say then: “Yelp risks removing itself from the protections of the CDA because it is now engaging in editorial functions. Further,  they are threatening to remove or filter the reviews and likely believe they have immunity under Section 230(c)(2), which protects interactive service providers from liability for “any action voluntarily taken in good faith to restrict access to or availability of material that the provider or user considers to be obscene, lewd, lascivious, filthy, excessively violent, harassing, or otherwise objectionable, whether or not such material is constitutionally protected.” However, as courts have reasoned , the phrase “otherwise objectionable” relates to “potentially offensive material, not simply any materials undesirable to a content provider or user.” Song fi Inc. v. Google, Inc., 108 F.Supp.3d 876, 883 (N.D.Cal.2015). Yelp’s decision to remove these posts may not qualify as “otherwise objectionable” as recent case law has demonstrated.”

Yelp is running into the same problem Google ran into once SEO became a real industry: the market has created a secondary industry that capitalizes on the algorithm. Yelp can try and retaliate by citing businesses and making demotions, but this is a problem they created for themselves.

Anytime you create an engine that ranks businesses based on certain factors, some businesses are going to purposely focus on those factors. In some ways, you might even consider this good business practice. Remember, every star lost in Yelp reviews is literal money on the table. The competition surrounding reviews is immense. Yelp should do a better job of filtering disingenuous reviews and leave business owners alone.

If someone from Yelp is reading this, then I have a good suggestion for them. If you want to reduce the chance of people gaming your system, then launch an arbitration program so businesses can pay a small fee and have an independent arbitrator decide if the negative reviews posted about them are accurate or not, by looking at the evidence provided by both business owner and poster.  If it turns out to be false, then it can be removed. And if no decision can be made either way, then it can go into the filtered section.  Yelp can even make a little profit by doing this! I bet that most businesses would easily pay a few hundred dollars per review for something like this.

In case Yelp should decide to sue review software providers and reputation management companies that recommend such software, in my opinion they cannot be held liable for what the business owners decide to do with the software. The same way the CDA 230 protects Yelp, a software provider merely provides a platform for its customers to use and should be protected from any liability.

For now us small business owners are at mercy of Yelp and have no other choice but to try and comply with their rules. I hope that soon more business owners will stand up for their rights and do something about it.